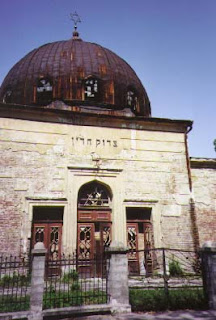 At the 2002 International Conference on Jewish Genealogy, Prof. Alti Rodal reported on a project to digitally photograph all tombstones in the Czernowitz Jewish Cemetery.

This project, sponsored by the Jewish Genealogical Society of Ottawa, Canada, was spearheaded by several members working with Dr. George Bolotenko of the Canadian National Archives (Ottawa). It goal is to produce a free, searchable, internet database of names linked to images of tombstones.

Obtain information about specific graves (photograph, approximate location according to the current cemetery map, burial register information), by writing to Bruce Reisch, the Czernowitz-L list moderator. He has been coordinating data transcription for the JGSO, which led the effort to photograph all the tombstones and to obtain copies of burial registers.

The exact location of individual graves is not known, as the current cemetery map does not correspond until 1946.

In August 2007, information on 4,293 burials were sent to JGS Ottawa, and subsequently posted on the JewishGen Online Worldwide Burial Registry (JOWBR) along with corresponding images. In May 2008, data on 3,992 additional burials were sent to JGS Ottawa but have not yet been forwarded to JOWBR. Altogether, information on 11,376 burials has been transcribed, including the two datasets above.
There are more than 28,000 tombstone photos in the collection (some are duplicates) so there's still quite a bit of work ahead before the project is complete. Prior to transcription of data from the tombstones, all burial registers prior to 1946 were transcribed into Excel spreadsheets.

Congratulations to the team of volunteers who have dedicated countless hours transcribing data and trying to read barely decipherable tombstones in multiple languages for this project!

Posted by Daniel Horowitz at 12:05 AM