Take your smart phone to the cemetery! 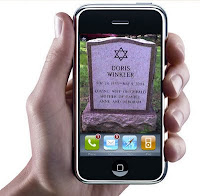 I was on Long Island in New York the other day, preparing to give a lecture, when I realized that my aunt Rika Singer was buried only a few miles from where I was to speak.

I decided to go a little early and pay my respects.

Thanks to GPS, I arrived at the cemetery with no problems. Soon I found the section, block and area.

But as I began counting rows and tombstones, I realized I had problems. According to the cemetery website, my aunt was buried in row O.

Was that a zero or the letter O?

It’s easy to have a row zero in some cemeteries - they may have had to add a row before the original first one to make space - but she wasn't there. Did I count the rows in the wrong direction? She wasn't there. Then I tried to number the rows by letters, so I started A, B, C, D ... That didn't work either.

By now, I was getting worried and decided to review my data. Out came my new iPhone, found a Wi-Fi connection and went online to check my family tree data. Yes, the information was correct. I checked the cemetery website again - the information was the same - but my aunt wasn't there!

Could I do a reverse look up on the cemetery database? It seemed easy. There was the name of the person in front of me, and the database should give me his location. I did that a few times but all the names had numbered rows. If my aunt was in Row Zero, I was in trouble.

Amazingly, the phone also can be used for its original purpose - to make calls! I rang the administration office and spoke to a very kind lady who confirmed that I should be looking for the letter O and not zero. She explained that the area is divided in two - one with lettered rows and the other with numbers. With that information, I moved over to the left section and walked a few rows to the front and found Aunt Rika in the same spot she had been in for nine years.

I then turned on the camera feature to take pictures of the tombstone, and turned to Google maps to get the exact coordinates of the place where I was standing at the moment with the "Show my location" feature (image on the left is just an example as Long Island is in New York, not Oregon!). After all, I didn’t want any other relatives to walk around for hours as I did to find our beloved aunt.

I finally sent the tombstone image via email to my cousin - on the other side of the world - to show him my findings.

What did we do a few years ago when we didn't have Smart Mobile Devices with Internet, GPS, cameras and phones?

Posted by Daniel Horowitz at 2:01 AM No comments: