Born in Vienna, Celia Male arrived in Alexandria, Egypt at three weeks of age, and came to London in 1953. Her British father, a bank manager in Egypt, has family roots in Plock, while her Viennese mother's family roots are in Bohemia and Moravia.
Celia's life in Alexandria influenced her greatly. From her earliest days she was exposed to many cultures, languages and religions (hence her Sephardic Jewish interests).
She was an industrial biotechnology consultant (Oxford, Biochemistry). For the past 10 years, she's been digging around in the Habsburg Empire, has helped many people find their families and solved many genealogical puzzles. Her maxim is that genealogy is a serious matter, but should be fun and accessible to all. Reading about it should be enjoyable too.

We have all heard of errors which have been indelibly carved into stone - and here is a very surprising one. I am starting my contribution to this blog with this because of the importance of Theodor HERZL in Jewish history.

The HERZL family tombstone/memorial is at the Döblinger Friedhof, Vienna, in the section once exclusively used for Jewish burials. I know the cemetery well as one set of my great-great-grandparents are buried here as well as one set of my great-grandparents and countless relatives - they are all very close to the HERZL tombstone.

The original tombstone had the simple family name inscriptions, now reproduced exactly on the new shiny tombstone/memorial. This remains at the same spot as the original grave after the HERZL family was exhumed and reburied on Mount Herzl in Jerusalem.

Click here for the Vienna website for the non-Jewish cemeteries (the Israelitische Kultusgemeinde - IKG - sadly relinquished its control over the Jewish section of the cemetery in the 1950s and it is now controlled by the Vienna Municipality) . You will not now find the name of the Herzl family as they are no longer buried there.

However, in 1904, Döbling did have a section under the jurisdiction of the IKG and it was known as the Israelitische Abteilung. The location of the grave is Isr. Abteilung I/1 - Crypt 30.

Strangely, the Herzl tombstone/memorial at Döbling has the following inscription: In diesen Grabe wurde am 3 Juli 1904 Dr Theodor Herzl zur letzen ruhe bestatet. In dem gleichen Grabe ruhten seine Eltern Jacob und Jeanette Herzl... It continues that their earthly remains were exhumed on 14 August 1949 and taken to Israel for reburial. 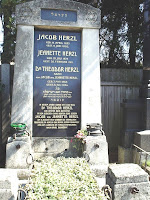 The translation: that on the 3 July 1904 Dr Theodor Herzl was laid to rest. In the same grave *lay* [past tense] his parents Jacob and Jeanette ... Herzl.

You can read here about the funeral in blazing heat, which was attended by an estimated 6,000, all walking from the Herzl home in the Hainzingergasse to the cemetery. A simple hearse was followed by the women of the family in a carriage. The mourners included leading literary and political figures, Zionist deputations from Vienna, from all the towns and cities of Austria, and from all countries of Europe. ....and behind these the countless masses of the unbidden, who came in no one's name, young and old, pietists and atheists, plain folk and "society". .... Never before had a Jew been accompanied thus to his grave.

No one has ever commented before on the erroneous inscription on the former tombstone / memorial grave which I have visited many times!

Have you spotted the two errors?

The funeral was on the 7th July 1904 and, furthermore, his mother did not predecease him: you can read his obituary notice here and that confirms these two facts: 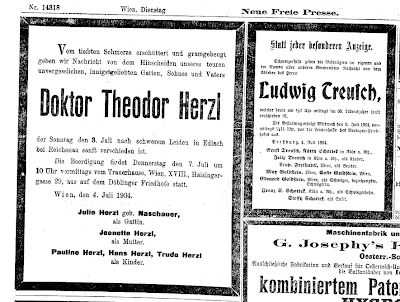 How strange that such an important tombstone/memorial should have two such blatant errors. Readers of the Jewish Graveyard Rabbit are the first to be told officially.

The super bonus for me is that the obituary notice next to Herzl's - for Ludwig Treutch - has a vital link (TREUSCH NEUSTADTL GOLDSTEIN SCHOTTEK) to my family, the WOTTITZ from Pressburg - yes, the very great-grandparents buried next to Herzl's grave. I had been looking high and low for this and miraculously here it is!