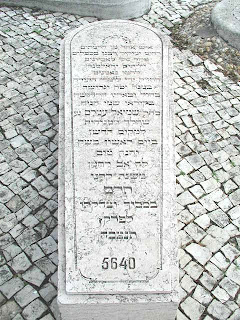 A venerable man, he respected and honored the Sages, charitable with the poor, he supported orphans and widows, extended help to the students of the Law in the Diaspora and the Holy Land, [such was] Samuel Amram. He passed away on Sunday, the 17th of Ab of the year 5640. May his soul be bound in the bundle of the living.

This site offers essential information for the Faro Jewish Cemetery. Its pages offer the site's history; the cemetery plot plan, the Portuguese and English translations of the inscriptions, whose images also appear (stones and inscriptions can be viewed either alphabetically or by grave number); along with additional information on the cemetery and community.

In Sephardic tradition, stones are not placed upright but are rather laid horizontally.

The land for the Cemetery in Faro was purchased in December 1851, however there are graves dating back to 1838. The Faro Jewish Cemetery is now listed in the Cemeteries classification as a Place of Public Interest in the Portuguese's National Register of National Historical Monuments. The return of Jews to Faro took place in the early 1830s. Most of these returning Jews came from Gibraltar and Morocco.

Our personal thanks to Ralf Pinto who was most kind and generous of his time and knowledge of the Cemetery. We are also thankful for Mr. Pinto's untiring efforts to assure that dignity and preservation of this Cemetery is maintained for future generations.

From 1838-1932, the cemetery was the resting place for the Comunidade Israelita de Faro - The Jewish community of Faro. Rabbi Josef Toldeano was the first to be buried there.

Members of the community were Retornados (returnees) from Gibraltar and North Africa who had fled the Inquisition centuries earlier. Although the community thrived, it became inactive in the 1930s and the cemetery abandoned.

In the mid-1980s, the late Isaac "Ike" Bitton raised funds enabling Ralf and Judith Pinto to restore the site in 1992-3. The cemetery museum is named for Bitton. In 1978, the site was officialy listed as an IIP (National Monument) and has been visited by thousands of visitors.

In 1993, 18 (the number means "life" in Hebrew) cypress trees were planted in honor of Portuguese humanitarian Aristides de Sousa Mendes; they are now taller than the cemetery's 12-foot walls.

The Synagogue Museum at the cemetery contains original furniture from the 1820 Rua Castilho synagogue demolished around 1960. A chupah (Jewish wedding canopy) is also depicted. There is a memorial to Samuel Gacon, whose Faro workshop printed the first book in Portugal - a Hebrew edition of the Pentateuch, according to the website. The front lawn displays a replica of the 1315 gravestone of Josef de Tomar, found in the 1930s and removed to the Tomar Synagogue Museum.

The site has been renamed the Centro Hisórico Judaico de Faro or “The Faro Historic Jewish Heritage Centre"
Posted by Schelly Talalay Dardashti at 12:00 AM