We'd like to welcome the first rabbi in Rabbit World:
Gary M. Gans has been the rabbi of Congregation Beth Tikvah in Marlton, New Jersey for 28 years.
The congregation hosts the South Jersey branch of the Jewish Genealogical Society of Greater Philadelphia. Gary is the Group Administrator of the Gesher Galicia DNA Project at Family Tree DNA, and serves on the Board of Directors of the Crescent Memorial Park cemetery, Pennsauken, NJ.
Gary was ordained at the Reconstructionist Rabbinical College in Philadelphia, where he was also awarded a Doctor of Divinity degree. Looking for a new challenge, he also earned a Doctor of Ministry degree in counseling from the Eastern Baptist Theological Seminary, a remarkable achievement for a rabbi!
Gary is board certified as a Clinical Member of the American Association for Marriage and Family Therapy, and is a Licensed Professional Counselor in the State of New Jersey, specializing in family therapy.

He is now doing fieldwork on a cure for addiction to genealogy…NOT!
Gary has one of the least expected hobbies for a rabbi:
he's an amateur radio operator (kosher Ham!) with the call sign N2EEF.
He will be available on this blog to answer questions about Jewish burial and memorial customs and to discuss Hebrew translations and symbols on tombstones.

Occasionally, after performing a funeral, I stroll through the cemetery appreciating the variety of tombstones and wondering about the people they represent. Such an event took place this summer at Har Yehudah cemetery in the Philadelphia suburb of Upper Darby. I was curious about a small footstone less than 2 feet high. 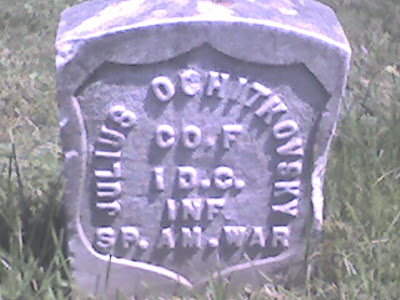 Around the perimeter was the deceased’s name, Julius Ochitkovsky. On horizontal rows were CO.F. , then 1 D.C. followed by INF, and then SP. AM. WAR. Clearly this was a marker for a Jewish veteran of the Spanish-American War of 1898. But what else was going on here?

Researching military tombstones, I soon realized, Julius had been a member of the F. Company of the First District of Columbia infantry regiment that had fought in Cuba. No other information was available on the stone and my genealogy bug and curiosity took over.

Checking the 1 June 1900 Census for Military and Naval Population, I found a recuperating Julius in the Washington Barracks of the General Military Hospital (precursor of Walter Reed Army Medical Center) nearly two years after the conclusion of the war.

He was listed as 31 years old, from 617 American St., Philadelphia, PA. He was born Jan 1879 and was from Russia, as were his parents. Julius arrived in the US in 1892 and was naturalized in 1899. Thus, he fought on behalf of the US after only being in the country for six years and became a citizen while recovering from his wounds.

I found a fascinating link to a newspaper article in the Washington Post from Thursday, 17 November 1898 describing a gala event as President McKinley addressed soldiers from the D.C. regiment. Listed among the participants was Private Julius Ochitkovsky. Click here to read the article; scroll down to Company F to see his name.

Still not having satisfied the genealogy bug, I contacted the cemetery office. Having the title “Rabbi” does have some small benefits, and they responded to my query immediately! I discovered Julius died at Coatesville (Pennsylvania) Veterans Home on 21 October 1935. His father’s name was Isaac, and a Yetta Ochitkovsky was the next of kin.

One last task was now to be completed. I found Yetta Ochitkovsky in the California death records. Yetta, whose maiden name was Cobert, was born on 1 April 1877 and died 21 November 1954 in Los Angeles, CA. How did she end up in California? I have no idea!

Who knows how long it has been since someone visited this grave or remembered Julius had even lived? There were no stones on this tombstone (a topic for future blogging.) For a few moments I visited the lonely grave of a wounded Jewish veteran and revealed a few details of his life.

May His Memory be for a Blessing.

Posted by First Rabbi in Rabbit World at 12:57 PM