Henk van Kampen of the Netherlands has just contributed to the blog about Utrecht's Jewish cemetery. I would like to follow on with our first artistic contribution.

My knowledge of the "Portuguese-Jewish Cemetery, Ouderkerk, near Amsterdam - founded about 1615 - is based entirely on Jacob van Ruisdael's famous 1655 picture from the Dresden Art Gallery which was exhibited in London two years ago.

There is a twin painting in Detroit, which I have not seen.

Unfortunately, the famous cemetery is now a shadow of its former self.

Goethe was so impressed, that he wrote an essay about the picture and Constable also regarded the picture highly. Ruisdael's painting is largely allegorical and includes an imaginary landscape.

Many famous people were buried in this Sephardic cemetery and the graves were documented by David Henriques de Castro.

This JewishGen site discusses the cemetery under "Amsterdam."

Note the impressive tomb in the centre of the picture. There is an amazing story behind it here. 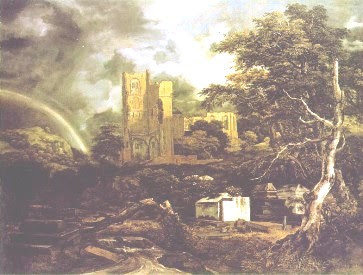 It is that of Doctor Philotheus Eliahu de Luna MONTALTO [aka Felipe Rodrigues de Castelo Branco.] Maria de Medici in Florence, where Dr MONTALTO was a respected practising physician, arranged for his body to be embalmed after his death in 1616 and sent to Ouderkerk for burial:

It is so sad we have no photographs of the early cemeteries in London which have been destroyed for ever but we do have two glorious paintings of this historic Amsterdam Sephardic cemetery.