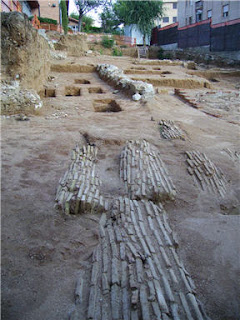 The Jewish Graveyard Rabbit recently posted about the ancient Jewish Cemetery in Toledo, Spain that was threatened by a school expansion project.

Rabbit has learned that a demonstration was called today in Tel Aviv, Israel in front of the Embassy of Spain at 5 Dubnow Street.

Rabbit also received photographs of the Toledo site, which appear here. For more information, click here for the Zakhor Center of Studies in Barcelona which is spearheading the fight to save the site.

Late in September the expansion of a school in Toledo caused the excavation of the ancient Jewish cemetery prior construction starts. This school and the residential complex built in the 80's, already destroyed a great part of the cemetery. 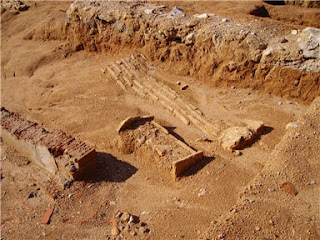 Today, besides two synagogues (of the 10 that existed at the time) which can be visited today as Museums, the ancient cemetery is the only other landmark which remains of the Jewish community which once lived there.

This community certainly deserves respect for their tradition and beliefs.

Posted by Daniel Horowitz at 2:26 PM