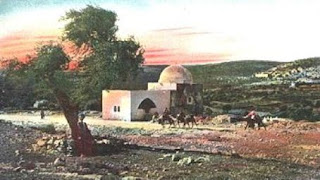 This week, we read the Torah portion וישלך Vayishlach, Genesis 32:4-36:43 throughout the Jewish world.

In this text, we read about the death and burial of our Biblical Matriarch Rachel. She dies while giving birth to Benjamin, and is buried by her grieving husband Jacob. In Genesis 35:20, Jacob buries her and sets up a pillar over her grave. It is located on the northern entrance of Bethlehem, adjacent to the neighborhood of Gilo.

Rachel’s tomb has been mentioned by Jewish travelers since about 1300 CE. The actual tomb consists of a rock with 11 stones; one for each of the sons of Jacob. Over the centuries, the rock was covered by a dome supported by four arches. In 1841, Sir Moses Montefiore was granted permission by the occupying Ottoman Turkish empire to restore the tomb. He funded the construction of the large two room building seen today. 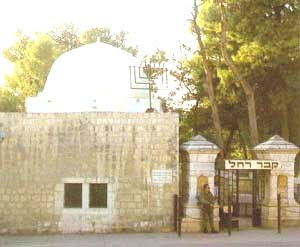 This Biblical cairn or pile of stones was a precursor of today’s more familiar markers. It continues to be the Jewish custom to mark a grave with a monument.
The dedication or unveiling of a grave stone is a custom that can be held anytime after the Shloshim (30 day mourning period). Sephardi Jews commonly dedicate the stone soon after the conclusion of the Shloshim, which is also the custom of many Ashkenazi Jews in Israel.
Ashkenazim in the Diaspora (outside the Land of Israel) often dedicate the monument near the first Yahrtzeit (Yiddish, the anniversary of death.)

Posted by First Rabbi in Rabbit World at 11:00 AM