Numerous mass graves are located throughout Ukraine and in the eastern territories of the former Soviet Union.

Created by Nazi German and local collaborators, the principal objective of the Einsatzgruppen (a mobile killing task force) was the annihilation of Jews, Gypsies and Soviet political commissars. As a result, 1.3-1.5 million Jews were killed between 1941-1943. 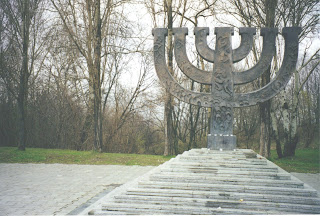 Two memorials mark the area of the Babi Yar Massacre. The first erected did not specifically mention Jews as victims although a commemorative plaque in Yiddish was added later. This second memorial, in the form of a menorah, was erected by members of the Jewish community to specifically commemorate the Jewish victims who were murdered at Babi Yar.

Babi Yar is a ravine in Kiev, Ukraine where 33,771 victims were systematically murdered September 29-30, 1941. The Babi Yar massacre was the largest single mass killing and is considered the largest single massacre in the history of the Holocaust. In the months that followed, thousands more were seized and taken to Babi Yar where they were shot. It is estimated that more than 100,000 people, mostly Jewish civilians, were murdered by the Nazis there during World War II.

According to a report published in 2005 by the U.S. Commission for the Preservation of America’s Heritage Abroad, over 550 additional mass gravesites have been identified throughout the eastern territories of the former Soviet Union. 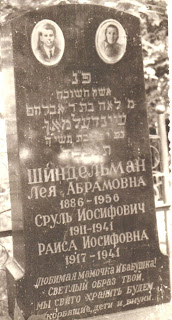 Malka Leah Karger SHINDELMAN died a natural death and was buried at the Lukyanofka Cemetery in Kiev.

Her photo appears on the gravestone, which is not a Jewish custom. During the Soviet era, it was a national tradition, regardless of religious affiliation, for Russians to include a personal photo on gravestones.

Flowers are not customarily left upon Jewish graves either, but on Russian Jewish graves, it also remains a common practice to see carnations representing a Soviet-era tradition.

Malka survived the war by fleeing from Berdichev, Ukraine on a train to Lake Balkash, Kazakhstan. When Bronia Shindelman Brenner erected Malka’s gravestone in 1956, she added a second photo to the stone as well as the names of two of Malka’s adult children. She did this to commemorate her siblings, Ruchel Shindelman AVRUM and Srulig SHINDELMAN, who were Shoah victims.

Srulig was last seen alive in the Jewish Prisoner of War (POW) camp adjacent to Babi Yar. One of the only 13 Jewish survivors of Babi Yar and a relative of ours, Yakov KAPER wrote in his memoir - “Thorny Road” - about last seeing Srulig alive. Yakov escaped from the P.O.W. camp; Srulig chose not to accompany him and was never seen again.

Ruchel was last known to be alive in the shtetl of Ruzhin, Ukraine in 1941 when the German Wehrmacht occupied the region. 24 years old and pregnant with her first child, it is unknown how she perished, but there is a mass grave in Ruzhin where Jews were killed. She is presumably buried in it. 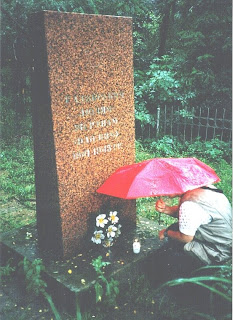 (RIGHT) Mass graves in small rural communities have simple markers or none at all. This one in Lyubar, Ukraine was placed in the early '90s by Jewish relatives of those murdered. A second marker was erected nearby to commemorate partisans. Low metal fences surround both mass graves.

The Extraordinary State Commission to Investigate German-Fascist Crimes Committed on Soviet Territory housed at both the USHMM in Washington, DC and at Yad Vashem in Israel, is a compilation of testimonies from residents after the war and lists victim and collaborator names by town. The sequence of local events during the War is often detailed in these files.

Pulitzer Prize winning author Richard Rhodes published Masters of Death: The SS-Einsatzgruppen and the Invention of the Holocaust, which includes a detailed account of Einsatzgruppen activities and includes an extensive bibliography of materials in German archives.

Other historical books about Babi Yar and the mass graves include Anatoly Kuznetsov’s Babi Yar: A Document in the Form of a Novel, The Black Book by Ilya Ehrenburg and Vasily Grossman, The Holocaust in the Soviet Union by Lujan Dobroszycki and Jeffrey Gurock, and French Catholic priest Father Patrick Desbois’ recent memoir, The Holocaust by Bullets: A Priest's Journey to Uncover the Truth Behind the Murder of 1.5 Million Jews, which uses forensic evidence, eyewitness accounts and archival research to document the murders of Jews in the former Soviet Union.

Father Desbois will be the keynote speaker at the 29th IAJGS International Conference on Jewish Genealogy August 2-7, 2009 in Philadelphia, PA.