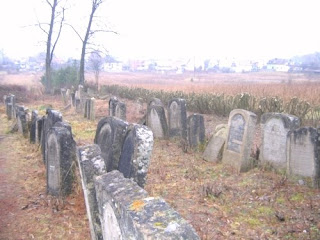 The project was co-financed by the Foundation for the Preservation of Jewish Heritage in Poland (FODZ) and the Polish Ministry of Culture and National Heritage.

Ruth has posted her own photographs, and FODZ has also created an online photo gallery of the results.

Jews settled in Jozefow in the 18th century, and by 1921 nearly 80 percent of the local population was Jewish. A very nice baroque-style synagogue, built in the late 18th or early 19th century, now serves as the town library.

The oldest tombstones in the cemetery date from the 1760s. I visited there in the summer of 2006, when I was doing the updates for Jewish Heritage Travel. The local librarian was very helpful, giving me explicit instructions how to find the cemetery, located near quarries on a hill just outside town. Access is via a dirt road off Kamienna street.

Parts of the cemetery were - sort of - clear, or at least fairly accessible, even in "high weed" season. But much of the cemetery was jungle.... Here are some photos to compare how it was, with the pictures on the FODZ site showing the area after clean-up.
Do visit Ruth's blog to see her photographs. Follow the links for more information.
Posted by Schelly Talalay Dardashti at 4:25 AM