International Jewish Graveyard Rabbit is happy to introduce new contributor Ellen Shindelman Kowitt. She is the webmaster for the Jewish Genealogical Society of Colorado. A former IAJGS board member and past president of JGS Greater Washington, she lectures and writes about Jewish genealogy.

Jews arrived in Colorado with the Gold Rush in 1859. The oldest Jewish burials in Denver were conducted by the pioneer organization, the Hebrew Burial and Prayer Society (later known as the Hebrew Cemetery Association) from 1860 to 1910 and were interred at the Denver Pioneer Cemetery “Old Jewish Section” located east of Cheesman Park on Capitol Hill.
Most Jewish remains and gravestones there were moved to the nonsectarian Riverside Cemetery and to the Jewish Fairmount, Golden Hill and Rose Hill Cemeteries in the early 1900s due to urban development. 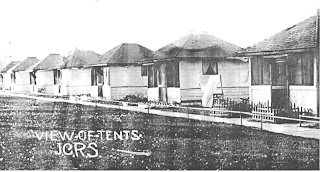 At the time, common treatment of tuberculosis called for "freezing the disease out of them with access to fresh Rocky Mountain Air," and patients lived in these unheated buildings.

In Denver cemeteries, many Jewish burials circa 1899-1954 were of those who travelled to two Colorado Jewish sanitariums for the treatment of tuberculosis. National Jewish Hospital opened in 1899, and catered largely to Jews with a less severe case of tuberculosis who were of German background and more assimilated. The Jewish Consumptives Relief Society (JCRS) served those with advanced stages of the disease and who were recent Russian immigrants. JCRS was a kosher facility with an onsite synagogue, and the patients were often observant.

Here are two stones and a donation plaque for Ernest Gluck: 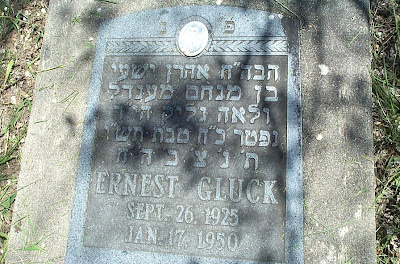 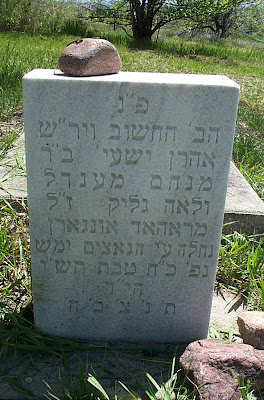 This stone above, with the same details, begins with a note about the Shoah (Holocaust). This second stone might have been erected by his family, particularly since it mentions erasing the Nazis - unrelated to a Colorado tubercular’s grave - but perhaps representative of stones in that generation commemorating others who died in the Shoah elsewhere.

This plaque was apparently constructed by his friends at JCRS.

Members of the Jewish Genealogical Society of Colorado assisted the University of Denver Judaic Studies Division with the creation of an online JCRS patient surname index. This project was awarded the IAJGS Malcolm Stern Grant in 2003. Copies of JCRS patient applications (click here to see a sample) can be requested and often include birthplace abroad, landsmanshaften affiliation, names and ages of children, nearest of kin and burial location at Denver cemeteries.

Regardless of whether a gravestone ever existed or has survived, all Colorado Jewish burial data has been gathered from local sources, indexed, entered into the JewishGen Online Worldwide Burial Registry and can be searched by the name of the deceased, cemetery or location. Gravestone inscriptions have been translated into English from Hebrew, Yiddish and Russian.

Following are the four largest Jewish cemeteries in the Denver metro area: