Londoner Gaby Laws has been researching her family for more than eight years. The daughter of a survivor, her interest began by trying to find out what had happened to her family. This was combined with a love of history - she grew up above an antique shop - and a desire to be able to pass on, to her son, the stories her father could never tell.

Angela Shire's interest in genealogy was sparked by the discovery of a diary written in the late-19th century by her husband's great-grandfather. Her researches have led to world-wide contacts with fellow genealogists and taken her to Krakow and various cities in Holland. Early Anglo-Jewish Genealogy remains her main focus. She is committed to locating new sources and, where possible, making access to existing records as widely and freely available as possible.


It's just over a year since Angela Shire and I started GenPals.com but the idea had been brewing for sometime before that.

To remember the exact reason we both decided to do it, is quite hard to quantify. Hopefully, the mix of my enthusiasm and Angela’s knowledge, experience and vast databases of information makes for a a useful tool for genealogists tracing their ancestors in the UK.

Why do we spend our free time reading inscriptions, researching families and standing for hours at a time in cemeteries taking photos?

It began in the most innocent of ways, a researcher asked about getting a photo of their ancestor’s tombstone on a forum. The cemetery mentioned, was not far from where a friend lives, so I asked him if he would take a picture and it snow balled from there. Why stop at one photo?

For me, the loss of such valuable information became blatantly obvious on a trip to Dieweg Cemetery in Brussels. Everything had been arranged by a dear friend of mine, Jan Bousse. He had warned me of the state of the cemetery but it didn’t really sink in until we arrived there. 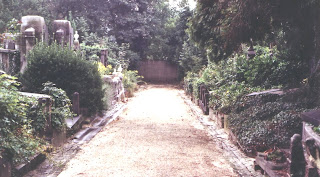 We walked down paths looking at stones, no doubt erected by loving families, but now worn, broken, fallen, completly covered in vegetation and appearing totally unloved. My own ancestors’ tombstones had to be ‘uncovered’ by the caretaker, it took days apparently.

Why are they all in such a state? I contented myself thinking that if it took me over five years to research my family and find where they were buried, then the same must apply to others. Add to the fact that many of the families of those buried at Dieweg were wiped out by the Holocaust and that may explain why these stones seem so forgotten.

We still laugh at the reactions of all the people in the hotel foyer on our return from Dieweg Cemetery. It really was a sight to be seen.

We hadn’t considered the problem of walking through to the lifts wearing mud splattered clothing, unusual hair adornments (twigs, leaves, more mud). It had rained and that along with crawling through the undergrowth did rather ruin our appearance. Those in the reception area were dressed for an evening out at the lovely local restaurants and there we were the mud-larks, we could ‘feel’ them staring and muttering.

I’m getting used to that - you only have to tell friends that you are going to photograph a cemetery to get a similar reaction.

Even when cared for, the headstones and monuments will decay, the memorials and epitaphs carefully worded by the families of each individual, the valuable information they contain, will be lost forever. So the work needs to be done – and that’s why!

GenPals Cemetery Project now contains over 2,000 inscriptions and headstone photos from cemeteries in the UK along with mini-family trees. A total of 5,500 individuals are currently recorded with more coming soon.

We have used numerous sources so that we could get to know each of the individuals listed, where they lived and what they did and have been delighted by the fabulous feedback received so far.

We have also included some history for most of the cemeteries along with a variety of items of interest.