Venezuela is located at the northernmost end of South America, has a population of some 30 million and covers 912,050 sq.km. One of the oldest cities is Coro, capital of the state of Falcon. It's a northern port city founded by Juan de Ampies in 1527. 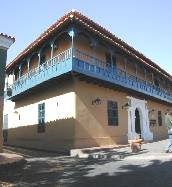 In 1827, a group of Jews emigrated from the Caribbean island of Curacao. Among the families were the Henríquez, Capriles, De Sola, Cardozo and Senior.

A prosperous businessman, David Abraham Senior bought a house in 1852 that was used as the local synagogue until the late 19th century. In 1986, it was sold to the state; since 1997, it has been a museum called Casa de Oración Hebrea (House of Jewish Prayers). It is considered a national monument and a legacy of the Sephardic Jewish culture in the early days of the city.

Until 1832, the small community did not have a cemetery. Joseph Curiel (1796-1886) established it when his 8-year-old daughter Johevet Hannah Curiel, died. He bought land outside the city for the cemetery. Today, it is located on Zamora Street and is mostly used with non-Jewish burials, with fewer than 30 Jewish tombstones. This makes it the first and oldest Jewish cemetery in the Americas still in use.

The site stands as silent proof of the community's assimilation, reflected in the names carved on the stones, as well as decorate elements of angels and other figures which are common in the Venezuelan Catholic culture. 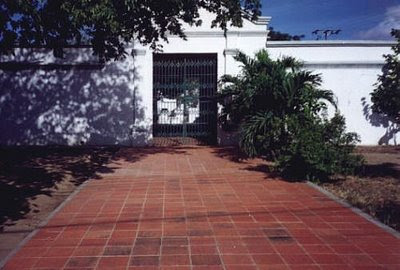 The Jewish Cemetery of Coro contains the tombs of influential families - Fonseca, Chumaseiro, Capriles, Maduro, the Curiels (patriarch Joseph Curiel and poet Elías David Curiel) and a notable woman with a Polish-sounding name who died in the 1940s.

Most of Coro's small Jewish community – 168 individuals – was forced to emigrate after violent rioting and a series of political and financial events. It was the first time that Jews had been driven out of an independent nation in South America.

In 1970, the cemetery was restored by the Asociacion Israelita de Caracas, which led the project and raised the funding, with the technical collaboration of the Department of Works, headed at the time by then-Governor Dr. José Curiel of Falcon state.

The cemetery is usually locked, and the keys are in the Museo de Arte Alberto Henríquez. Hebrew letters are still visible on the old stones and a large Star of David is at the entrance of the cemetery.

Posted by Daniel Horowitz at 12:00 PM