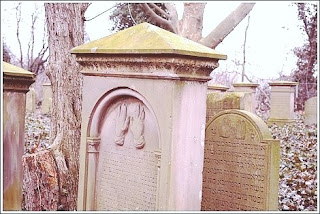 He has beautiful photographs and interesting text on the Bonn Jewish Cemetery - Schwarzrheindorf - on this blog post.

The photo above is that of a Kohen - although I cannot see enough detail to provide the name of the individual. We know that the person buried there is a Kohen - a descendant of Aaron - because of the traditional depiction of two hands with fingers held in a distinctive pattern.

On the Rhine's right bank, it is one of the oldest Jewish cemeteries in North Rhineland and is today under the administration of Dusseldorf's Landesverbandes der judischen Kultusgemeinden.
The first burial of more than 400 graves was in 1623 - Schabtai bar David. The last burial was in 1992, that of Theresa Weidenbaum, nee Bachem, widow of Theodor Weidenbaum. Until 1873, nearly all the Jews of Bonn were buried here.

In 1818, Bonn's Jewish community acquired the site and shared it with the community of Villich/ Beuel. From 1873, a new Jewish cemetery (Bonn-Castell) was opened for Bonn.

In 1898, Schwarzrheindorf was divided by the Bonn community, with the northern section for Villich/Beuel burials and for others, but the Bonn Jewish community no longer used the southern section because they had the new Bonn-Castell site.
During World War II, Schwarzheindorf became overgrown and was severely damaged in 1939.
In the 1950s and during 1966-1968, it was restored. An entrance memorial, erected by the city of Beuel, honors the Holocaust victims.

Read the complete post and see Rudy's photographs at the link above.

He also has another post, with more details on Bonn's six old Jewish cemeteries and more photos.

Here is a photo by Rudy of the Mehlem cemetery: 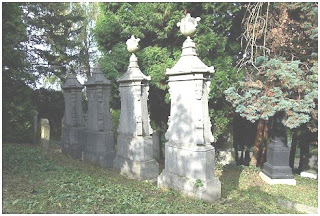 Do read both of Rudy's posts at the links above. Rabbit looks forward to learning about more of his cemetery visits!

Posted by Schelly Talalay Dardashti at 3:04 AM